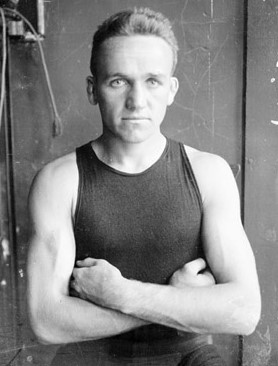 Mike Gibbons “The Saint Paul Phantom”, is regarded by boxing historians as the greatest fighter ever to live from the state of Minnesota, and one of the greatest fighters of all-time. The top two boxing historians are universally regarded as former Ring Magazine founder and editor, Nat Fleischer; followed closely by fellow historian, Charley Rose. Fleischer rated Gibbons as the #9 Middleweight in history, while Rose rated him even higher at #4 of all time. He is no doubt, Minnesota’s all-time pound-for-pound king, per general consensus, and endorsed as such by the great George D. Blair.

He began his athletics in wrestling at the YMCA in downtown St. Paul, and it was here that he met an athletic instructor by the name of George Barton. It was a meeting that would change the course of the rest of his life. Barton, a former boxer, saw real athletic talent in Gibbons and encouraged him to try his talents with boxing. Gibbons was a natural. Barton tuned him pro in late 1907 against Newsboy Brown, a fight in which he won a 6-round decision. Boxing was illegal in Minnesota at the time, making it not only difficult to line up fights for Gibbons, but also extremely risky. Getting caught, carried with it a penalty of 7 years in jail and/or a $1,000 fine (about $23,000 today). So-called, “sneak fights” were often staged in barns, small halls, or on barges on the Mississippi. But his knack for evading punches, and his accuracy in delivering them, was quickly beginning to get Gibbons both exposure and notoriety.

From 1910 to 1921, Gibbons fought 106 fights without an official loss, facing all the top contenders of the day. Notice that the word, “contenders” and not “champions” was used here. It is a historical fact, that three world champions publicly evaded Mike Gibbons like a leper. They were George Chip, Al McCoy, and Frank Klaus. And these weren’t just cases of wise managers protecting their champions (although that was true), Chip, McCoy, and Klaus wanted nothing to do with Gibbons themselves. Gibbons was commonly called the “uncrowned champion,” as none would fight him with their titles at stake. Chip fought Gibbons three times, but not until years after his title reign was over. McCoy faced Mike once, and one time was enough to convince him that he best never do it again, as Gibbons gave McCoy a boxing lesson over 12 rounds. McCoy won the Middleweight crown from Chip just two months after his loss to Gibbons, but with his butt (and his ego) still sore from the whipping he had incurred from the St. Paul Phantom, he never looked Gibbons’ way again. No one wanted to fight Gibbons. Why? Well, first off…you were probably going to lose. Secondly, you were going to look wholly unskilled in the process, throwing your best stuff and rarely connecting. And last, but not least; Gibbons was dangerous. Unlike the vast majority of history’s defensive gurus, Gibbons had a bit of a punch. He could hurt you; especially with his right.

Indeed, the man known throughout the globe during the first quarter of the 20th Century as the greatest defensive genius of his time, also possessed a top-rate offense as well. Unlike most defensive guru’s who seem to lack a punch, the same cannot be said of Gibbons. In matches where he knew he would have an official verdict, he ended things more than half of the time-an impressive KO ratio to be sure. In Gibbons’ own words in 1919 before his super-fight against Mike O’Dowd, “I am a boxer, and almost without exception all my matches have been boxing matches of the no-decision variety. I have been employed by various clubs to display such skill as I have as a boxer, and it never has been part of my agreement to knock out my opponents. The men I have met have been in the same business; like me, they make their living at it, and I have on many occasions outpointed opponents whom, perhaps I could have stopped if had I wanted to. But I never could see the necessity for trying to win all my fights in this way. So, because of this, my record is not so impressive as those of other boxers who try to make every round the last one of their bouts. On several occasions though, I have tried to stop my opponents, and generally I have succeeded.”

Gibbons’ spent his entire career avoided by title holders-too good for his own good. It was not until 1919, when the Phantom was slowing down just a bit and coming nearer to the end of his career, would he get his only chance at winning a world title. The opportunity would come from fellow St. Paul native, Mike O’Dowd. O’Dowd had been the champion for two years and having already defended his crown six times, O’Dowd was game enough to give his Gibbons a shot. Officially the contest was a no-decision fight, as Minnesota had legalized prizefighting in 1915, but did not allow official decisions, hence the newspaper decisions of the time. O’Dowd’s title would still be on the line, but only if Gibbons could knock out the champion-those were the rules of the day. No one had ever knocked either fighter out before, so a knockout was not likely for either man. Nevertheless, the world had waited for years to see Gibbons get a shot at the title, and his fight with O’Dowd was so big, that trains from all across the United States and Canada were booked full to St. Paul for the affair.

Gibbons was elusive and boxed well that evening, but he lost the verdict. With his best days behind him, O’Dowd’s youth and over-aggressive style proved to be a little too much for Gibbons. The event set the Minnesota record for attendance with 9,559 people; and financially as well, with a gate of $41,846. Adjusted for inflation, this figure amounts to roughly $575,000 in today’s money. Gibbons fought O’Dowd two more times, winning one of them, but both contests were after O’Dowd had lost the title to Johnny Wilson on a controversial decision. Gibbons finished his career in 1922 after knocking out Danny Fagan. He began having vision problems and his doctors told him that he could go permanently blind if he continued his ring career. He quit on the spot, and never turned back. He finished with a combined 133 fights and was never knocked out. If you account for the unofficial newspaper verdicts, his record reads as 113 wins, 9 losses, and 9 draws. A remarkable record in a remarkable era.

History
Though several individuals had previously considered creating a hall of fame for Minnesota boxing, it was noted boxing historian Jake Wegner who pulled together the local boxing community in 2009, filed for nonprofit status, and assembled a board of directors for the new hall. With Wegner as the president, the board consisted of Jeff Flanagan (Vice-President), Don Evans (Treasurer), Jim Wells (Secretary), Denny Nelson, Jim Carlin, and Wayne Bebeau. The inaugural class of inductees was announced on July 5, 2010 [3] and the induction banquet took place on October 12, 2010. [4]

This message is only visible to admins:
Problem displaying Facebook posts.